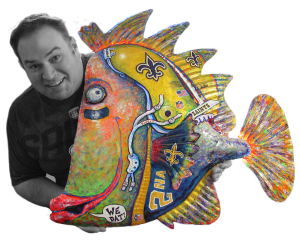 Thomas “Tuna” Seither was born & raised in New Orleans, Louisiana the youngest of six children & has his older sister Kathy to blame for his fishy nickname… although for almost his entire life no real reason has ever surfaced for the moniker.  The Artist credits the unique charm of his hometown for bringing a certain festivity to his work.  The pageantry of “The Big Easy”, be it the costumes of Mardi Gras or the uniforms of The New Orleans Saints, had a profound effect on the young Artist’s imagination.  But it was his childhood visits (with his Spiderman Comics in tow) to press boxes with his Sportswriter Father, Dick Seither, that led to his choice of subject matter.  Suddenly Archie Manning was competing with Peter Parker for space in Tuna’s drawings & football uniforms were replacing superhero costumes.  It was also around this time that the Artist began re- designing his own versions of the Saints uniforms… a self-admitted obsession that continues to this day. 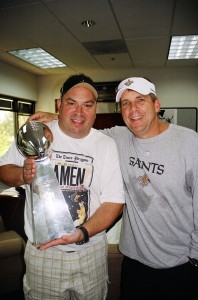 Following his graduation in 1989 from The University of Southwestern Louisiana (now The University of Louisiana at Lafayette) Tuna was almost immediately propelled into the world of professional sports that he’d had such an affinity for.  With a friendly, caring assist from a then rookie Atlanta Falcons Quarterback named Brett Favre, the Artist began knocking down commissions from pro athletes like Dan Marino and Mike Singletary’s retirement portrait from his Bears’ defensive teammates.  When The NFL Players Association commissioned a large series of Paintings for their offices in Washington, DC, Super Bowls and Sugar Bowls followed.  In an unprecedented move for an Artist Tuna boldly captured in action the then expansion Jacksonville Jaguars in a series of Paintings & Prints before the team even played their first game in the year leading up to their Inaugural Season. 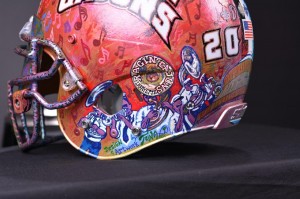 Tuna Seither is an Artist who embraces the technical & fundamental details of Realism while seeking to both celebrate and exaggerate all the other limitless aspects of a Painting.  While many of his works explode in movement & ultra-vivid colors, other pieces may seek to capture the quieter simplicity the subject is yearning for.  While many of his renderings take on a “Where’s Waldo?” quality for their immense content & hidden details within over-stuffed compositions, still other works choose to make a singularly bold statement.  It is in his adherence to this stylistic flexibility that Tuna continues to challenge himself, constantly stretching the confines of his own perceived boundaries within his work.  But the Artist truly believes that it is in this approach that he most challenges his viewers to take the visual journey with him… to continually look for & expect something more and hopefully find some things they haven’t seen before.