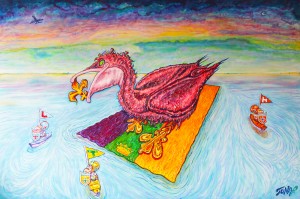 Stuck in the funk & fog of a post-Katrina creative rut after almost six feet of floodwater filled his home, Tuna turned to a local Icon, The Louisiana Brown Pelican, to express both his despair & his hope. Desperate for an appropriate, meaningful symbol or theme for the first post-Katrina Lakeview Fest Print in his nearly destroyed neighborhood, The Louisiana State Bird quite literally came to the Artist’s rescue.  Having casually appeared in some of Tuna’s paintings in the years before Hurricane Katrina, the Artist took to calling his creation “Pel Lis Can” as a play on the Fleur de Lis he was always placing in his beak.  But it was in the 2006 Lakeview Fest image that Tuna first embedded a red heart into the gold Fleur de Lis, symbolizing the allegiance & devotion to the hurricane-ravaged region and all its hopes, fears and resolve. 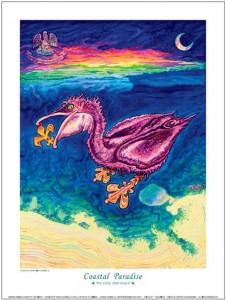 In 2010 after the BP Oil Spill Disaster in the Gulf of Mexico Tuna teamed with sponsor Coastal Shoring to create a Print entitled “Coastal Paradise; We Love This Place” to benefit The Lake Pontchartrain Basin Foundation’s coastal restoration efforts.  Gently cradling the heart embedded Fleur de Lis in his bill, Pel Lis Can majestically floats amidst electrifying blue & green water gracefully flowing into the serene, pastel shoreline.  Above, a vibrant colored sky engulfs a crescent moon and the Louisiana State Seal, which proudly states “Union, Justice and Confidence.”

After a 40 plus year fight to save the Bird from extinction followed by the heart-breaking images of oil soaked Pelicans after the BP Oil Spill, The Brown Pelican has valiantly established himself in our psyche & in Tuna’s creative mind-set.  From Pel Lis Can’s one of a kind “Fleur de Feet” to his hidden Louisiana boot, crescent moon & whatever other forms he may choose to embody, Tuna’s little friend is going places only he can imagine.