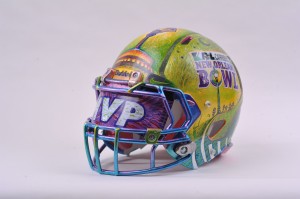 Tuna Seither was chosen to paint the “new” New Orleans Bowl 2012 MVP Trophy, which for the first time is a helmet designed by the artist. This MVP Trophy will be awarded to the most valuable player chosen after the game between The University of Louisiana Lafayette and East Carolina on Dec. 22. 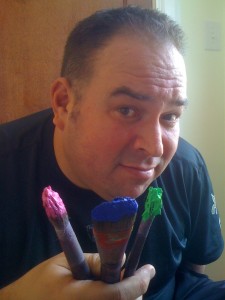 “I’ve had a long relationship with both the Sun Belt Conference and The Greater New Orleans Sports Foundation,” said Seither, whose image for Super Bowl XXXVI titled “N.O. City Does It Better!” was given to 90,000 visitors by the Sports Foundation that year.

Seither is a graduate of the University of Louisiana at Lafayette and was honored to paint the Inaugural Sun Belt Football Conference Print in 2001 as well as the 10th Anniversary Print for the Conference in 2010.

“I completed the MVP Trophy in early December,” he said.  “It is an absolute thrill for me to explore the concept of painting a helmet that would be used as a Trophy.”

Seither said that while painting on the helmet had challenges not indicative of traditional flat canvases, he focused on the artwork and the logo itself to conceptualize the Trophy.  “The key design element for me was painting the letters “MVP” in the eye-shield and then giving the facemask a burst of color,” he said.  “The cool thing is that I was able to paint on both the front and back of the shield, and this became the central focus of the Trophy.”

The Trophy will be on display on the sidelines during the New Orleans Bowl.